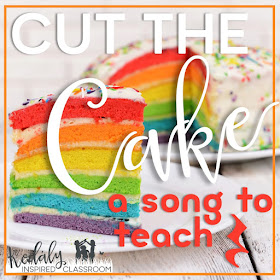 Here is one of my all time favorite books: 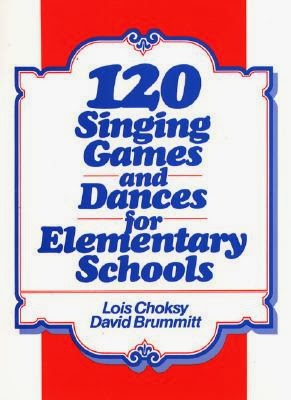 I think I got really lucky at some point and found this on ebay for about $50. Yikes! I didn't even know what a gem it was at the time! If you ever see this book, snag it. It will be worth it!

This book is jam packed full of singing games in any formation you can think of and it sequences them not by melodic/rhythmic concept, but by movement concepts, which I think is really neat.

Obviously I am not going to try a square dance or cicilian circles with my kindergartners, but this offers a variety of different kids of dances and gives you and idea of what grade level it might be appropriate for. So many of these singing games and dances will fit right into your concept plans, but some are great just to do for FUN even if they melodically/rhythmically to difficult to read for your students.

One of the songs that I pulled recently for some more ta rest practice is singing game called "Cut the Cake". 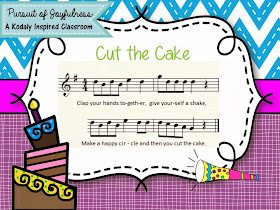 Here's a quick demonstration video of some of my kids playing the game. I wish I wouldn't have sung along, I was sick and sound terrible. Great reminder to let your kids sing alone, Lindsay! During phrase one students clap hands, phrase 2 we shake, phrase 3 everyone in the circle grabs hands, phrase 4 "it" slices the "cake" and holds out both hands. Where ever "it" sliced the cake, those two students race in opposite direction around the circle and tag "it's" hand when they get back. The first one to tag "it's" hands becomes the new "it" and the game starts over. You need to talk about safety before you start this game. When the two people are running in the opposite direction they will pass each other at some point. They need to watch out for the other person. In my room, if they bump into each other, the game is over. The kids love to play the game, so they are really careful not to bump into each other.

After we have played the singing game we go over to the board and I have this slide projected:

Find these ready-made slides on my TPT page here. 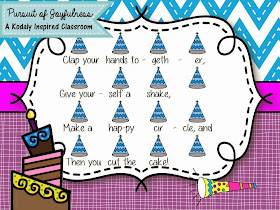 We pat the beat in our laps as we sing and identify that the party hats are showing us the steady beat. 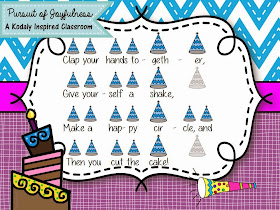 If I am in the preparation stage of ta rest, I show this slide where the hats with rests look different because they are a gray or "empty" looking. Students quickly see that they are like that because there are no words underneath them. We practice tapping and clapping the rhythm (the "way the hats look"). 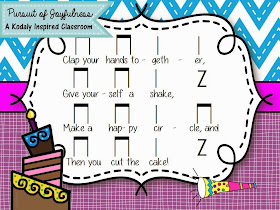 Once ta rest has been presented, we can use this song for practice and try reading the rhythms with their rhythm syllables and making no sound on the rests.

In level 3 we worked on creating musical transitions from one song to the next to make our lessons seamless. I love to use a rhythmic transition from this song to "Pitter Patter" which I first found in one of John Feierabend's books. I play the "eraser game" transforming "Cut the Cake" into "Pitter Patter" by erasing beats 3 and 4 of the 1st and 3rd line and changing them to ti-ti's. The 2nd and 4th lines stay the same! 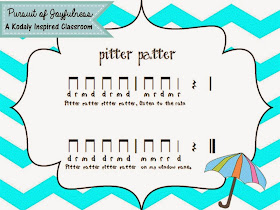 Have you used either of these two songs in your ta rest concept plan? What are your favorite ta rest songs?